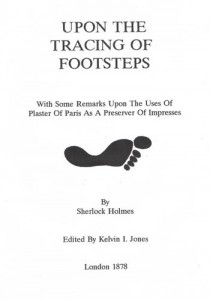 This slight monograph first appeared in London in 1878. Written by the renowned private consulting detective, Sherlock Holmes, it soon became a classic in the field of criminology which at that time was in its infancy. Hans Gross, the Austrian criminologist, lauded the work as ” a model of practicality” because of its use of Plaster of Paris as opposed to the more traditional wax alternative which had hitherto been applied. Holmes was believed to have derived the method from leading French criminologists of the day, notably Bertillon. The monograph was discovered among the effects of the late Mrs John Watson, nee Morstan, by her granddaughter and first published in a limited edition in 1983.