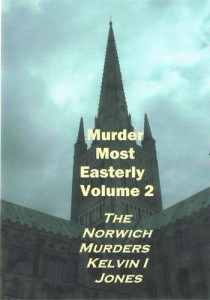 When parts of a woman’s body start to turn up in various locations in Kings Lynn, Norfolk, DI Ketch of the Norwich police suspects the victim may have been a Latvian immigrant. Suspicion soon turns on the owners of a Russian restaurant in the town and after a short investigation, the owner’s father is arrested for murder. Several months later the body of another Latvian woman is found in a church in Norwich. Near it is a small wooden figure of the victim, contained in a miniature wooden coffin. It transpires that she was a sex worker who lived with her boyfriend in Kings Lynn. The body’s discovery leads Ketch to suspect that this is the work of a serial killer, a suspicion soon confirmed by the profiler, Professor Bourne, who informs him that the crime is motivated by religious obsession. Kett finds a parallel with a similar murder in Scotland some years ago, which was never solved, although suspicion fell then on a known paedophile, Pieter Hess. He contacts the Dumfries police for detailed reports. A few days later another female victim is found in the ruins of a chapel on nearby Ketts Hill, the body laid out in an identical fashion.