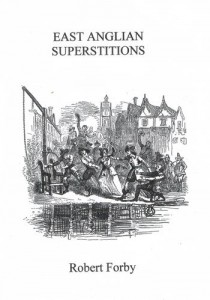 Originally published in the 1830’s by a Victorian folklorist and antiquarian scholar from Fincham in Norfolk, the book describes the origins of many superstitions and folk beliefs in his native county and that of Suffolk. Drawing on a wide variety of examples, the author shows how in the early nineteenth century when he was writing, the people of Norfolk and Suffolk shared a great number of superstitious beliefs and practices. The author provides many examples of how people at the end of the 18″‘ Century believed in such beings as witches and how they would go to great lengths to protect themselves against their influence by, for example, the hanging of horse shoes or the wearing of charms around their necks. Among the other curious practices listed are the ancient method of fortune telling using a key and a family bible, love charms and a variety of cures for different illnesses, the most popular being that for the “ague” – rheumatism and arthritis being very common during the period under question. This rare book, which has not been reprinted since the beginning of the 19th Century, provides a fascinating insight into the beliefs of our East Anglian antecedents and is sure to be of interest to anyone with a passion of the history and folklore of East Anglia.