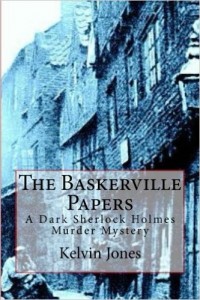 When Leonard Smith, a publisher of erotic books, is found brutally murdered in his London flat, Inspector Lestrade asks Sherlock Holmes to assist him. Holmes soon suspects there is a criminal conspiracy behind the murder, a suspicion which is confirmed when Sir Henry Baskerville’s wife, formerly Beryl Stapleton, disappears. Travelling to Dartmoor, Holmes and Watson discover that Sir Henry is, along with Oscar Wilde and others, a member of Smith’s exclusive book club, and that his behaviour has become increasingly irrational. Dark events then crowd in; two telegraph boys are savagely butchered in London’s East End, Sir Henry’s maid is found strangled on the moors and there is an attempted assassination of King Edward V11. Holmes returns to London to face his mortal enemy and reveal at last the shocking truth about the cruel and seamy underbelly of Victorian society.

Kelvin I Jones is the author of ‘Sherlock Holmes: The Plagues of London.’ Ed Hoch, the renowned American crime writer, has said of his Sherlockian work: ‘Kelvin I Jones reveals a sensibility and knowledge of 19th Century literature that extends far beyond the world of Sherlock Holmes.’ ‘Decidedly idiosyncratic…the author’s deep knowledge of the time, the place and the criminal history is evident throughout…a gripping read…’ Roger Johnson, The Sherlock Holmes Journal, writing about The Plagues of London.